Each year, we invite our members and staff to gather and reflect on the previous year’s successes and events. We will review the financial state of the Credit Union, hear from our CEO, Chairman of the Board, Board of Directors, Supervisory Committee, and more. It gives you the chance to exercise your rights as a member-owner of the Credit Union by getting to know the Peninsula Credit Union team.

The 85th Annual Meeting was called to order by Chair, John Bolender at 5:02 p.m. who welcomed those present.

Jim Morrell welcomed everyone to the unique virtual annual meeting resulting from COVID-19.

Sue Barnard, Secretary ascertained that there was a quorum of members present.

Sue Barnard gave the Nominating Committee report stating that three members had been nominated to serve on the Board of Directors and there were no other nominations received or petitions challenging either of the nominated candidates. She then asked that a unanimous ballot be cast for those candidates for the Peninsula Community Federal Credit Union Board of Directors. A nomination to cast a unanimous ballot was made and seconded. All present were in favor of this motion.

John referred to the President’s, Chairman’s and Supervisory Committee’s report in the Annual Report for 2020.

Jim Morrell, CEO noted that 2020 was a unique year with the pandemic that changed our lives. Jim noted that PCFCU strived to provide members the support necessary during the challenging year. Jim highlighted the year by referencing the 29 regulatory changes, $7 million in member loan modifications the launching of the Puget Sound Emergency small dollar loan program, the PayDay Alternative Loan Program and making $3.3 million in SBA Payroll Protection loans to 69 businesses. During all of this, Jim noted that we implemented the new online and mobile banking programs. Mention was made of considerable asset growth ending the year just shy of $250 million which was a 26% increase over the past year end. The increase was largely due to economic stimulus payments being reserved by members in their checking and savings accounts. As a result, Jim noted that our capital ratio slipped to 8.01%, that income was $1 million over budget and that the delinquency rates declining was indicative of members prudently managing their money. Jim thanked the entire team of staff for their flexibility, knowledge and service they provide for PCFCU members.

In closing, John Bolender thanked the entire staff and stated that he was impressed by their perseverance and ongoing focus upon serving the membership.

There being no further business, the meeting was adjourned at 5:12 p.m.

At Peninsula, our member-owners are our shareholders. We are committed to offering convenient access to financial information about their credit union.

Our Annual Reports give further insight into our financial condition, but also offer details about our community involvement, yearly business achievements and perspective into important issues affecting credit unions locally and nationally. 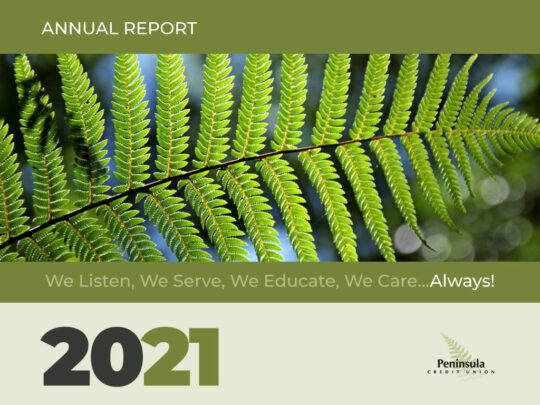 Volunteers of Peninsula Credit Union have the opportunity to strengthen the economic well-being of the communities we serve to benefit everyone, whether low to moderate income or wealthy, unbanked or underbanked. Through strong understanding of financial challenges and opportunities that exist within our community, volunteers offer strategic direction that ensures the credit union will remain independent, viable, and always ready to protect and serve the interests of our members and our community.

When volunteers commit to the credit union, they receive ongoing professional development making them effective leaders; strong networking opportunities to get to know others who share their values; contribute to greater opportunity and improved well-being of the place where they live and work.